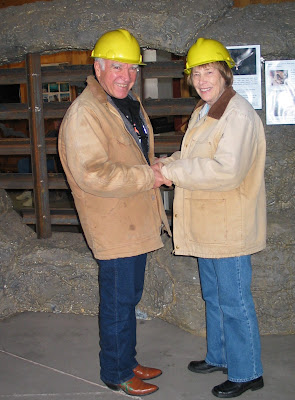 “…going down down down, about a slip down….”
The U. P. is copper country. The large amount of copper in the area spurred a mineral rush back in 1843. The U. P. was awash with mining operations up until around 1945. Mining companies such as the Quincy Mining Co. produced over three-quarters of the nation’s copper. These operations were not locally owned but owned and financed by Eastern investors. The tons of money from these mining operations flowed into their coffers to finance their lavish lifestyles. Nowadays tourists supply the cash flow.
We joined a tour of the Quincy mine and explored a 2,400 foot section of the seventh level. We got some idea of what it must have been like to work deep down in the dark, damp, cold bowels of the earth. Not very pleasant. As I listened to our tour guide describe the back breaking work and long hours of the miners I couldn't help think of that country song, “She got the gold mind and I got the shaft…”
Some of the mine workers were no more than boys. Fires, falls, explosions, cave-ins, and mechanical mishaps killed about one miner a week. Others went blind or lost legs and arms. Sure, some miners made enough money to buy a house (probably a shack by today’s standards) but as one woman in our tour told us, most of them died in their forties and fifties. Her grandfather who worked in the mines died at 45.
That’s the capitalist way I guess; the people work and crash while the fat cats get the cash.
Posted by Maestro at 7:16 PM