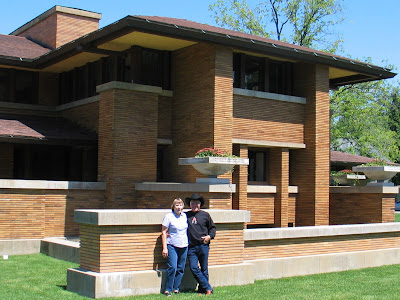 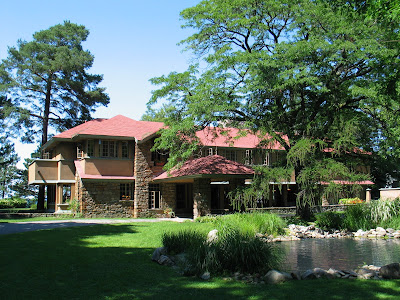 Buffalo, I never thought there was a here here. I know OJ played for the Buffalo Bills but I thought the Bills were just another New York team from no particular place. But here we are in Buffalo, New York, home of the famous Buffalo Bills football team. Hummm, there seems to be a church on every corner instead of the usual Starbucks. That’s weird, how am I going to get a latté? They have some great architecture here though. There are some nice buildings downtown, we had a look inside the Lewis H. Sullivan Prudential (Guaranty) building that was built in 1895. We also went to see the newly restored Frank Lloyd Wright Darwin Martin House (photo on top). In nearby Derby we saw the Graycliff House (photo on bottom) which was also designed by Wright. Brother Bob will get a kick out of this, in 1950 Graycliff was bought by the Order of the Pious Schools, (known as the Piarist Fathers) a religious order founded in Rome in 1617 by St. Joseph Calasanctius. They turned the Wright designed house into a monastery of sorts until the order’s financial difficulties caused them to sell the property. It is now in the process of being restored back to its original state.
Nearby in East Aurora is the Roycroft Arts and Craft Communityand the Elbert Hubbard’s Roycroft museum. It is a must see for all those Arts and Craft aficionados out there. We had a nice dinner there at the Roycroft Inn.
Posted by Maestro at 5:52 PM