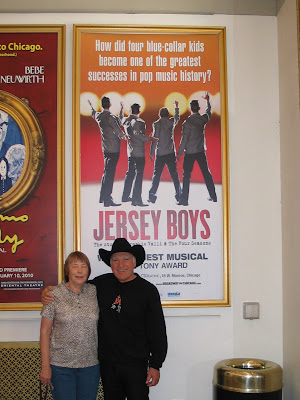 Now I’m not big on plays or musicals…our friends Nore and Nancy took us to a Valclav Havel play in San Deigo once that I liked, and Cats was OK, but I don’t go to these things on a regular basis. The Jersey Boys traveling company played in San Francisco back in 2007 but it didn’t sound like something I would like…Jersey Boys? What? A bunch of singing Wise Guys? No thanks. Yea, Frankie Valli and the Four Seasons, I remembered their songs but how can a play about some old 50’s rock and roll guys be any good. So when cousin Doug suggested we go see the Jersey Boys, Chicago, I more or less just went along for the ride. Whoa, I didn’t know what I was missing. It was fantastic! It brought tears to my eyes, especially after just visiting the Rock and Roll Hall of Fame. The Jersey Boys really put me in a Rock and Roll frame of mind. If you ever get a chance to see this play..GO! I guarantee you will love it and will be singing, “Sh air air airy bay-ay –be, Sherry baby” for at least the following two weeks.
Posted by Maestro at 2:00 PM