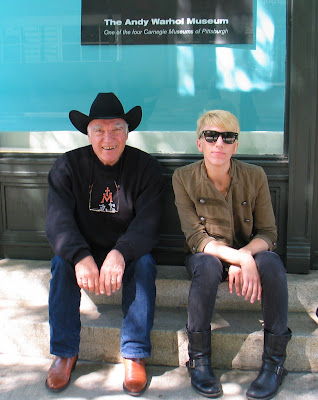 For me as a Californian Pittsburgh, Pennsylvania has three main attractions; the Pittsburgh Steelers, the Pittsburgh Pirates, and the Andy Warhol Museum. The sport stadiums and the museum are all clustered downtown within a few blocks of each other. I really wanted a photo of myself taken in front of the museum and as luck would have it an employee of the museum happened to be sitting outside the building having a Starbucks Latte. I took my Andy Warhol Museum photo with him. I think Andy would have liked that. Andy was born here in 1928 and left for New York City in 1949 to become one of America’s most famous artists. He died in 1987 at age 58 and is buried in a Baptist Byzantine Catholic Church in a suburb of Pittsburgh. If I would have had the time I would have visited his grave site to pay my respects. But we had a tour booked at Frank Lloyd Wright’s Falling Water house and I wasn’t going to miss that for anything.