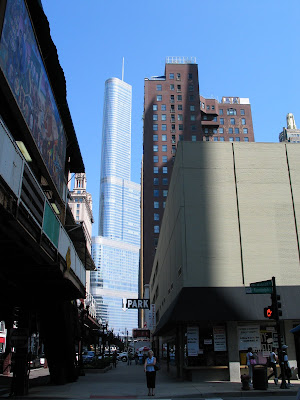 Cousin Bill is a member of most of the museums in town so he shagged us some tickets to see the new wing at the Chicago Art Institute, plus the Museum of Contemporary Art, and the Chicago Cultural Center -where there was an exhibit of some recent art from China. That China show was the best of them all. As most of you know I am interested in Asian culture so it was interesting to see what young Chinese artists are up to. As far as the other two..well, the highlights were that I saw an Ad Reinhardt Black Painting at the Contemporary, (for those of you who don’t follow my Book of Art readings I talked about these black paintings in reading #17 http://www.youtube.com/watch?v=pYsPn8JSotY&feature=channel_page ) then at the Institute I met TV star Ben Stein coming up the stairs as we were going down…I pointed at him and said, “It’s you,.. from TV,” and he said, “Yea!” Now if he had pointed back and said, “Yea,.. it’s you, the Maestro!” I would have known he’s been paying attention, after all this was an art museum.
Posted by Maestro at 1:59 PM