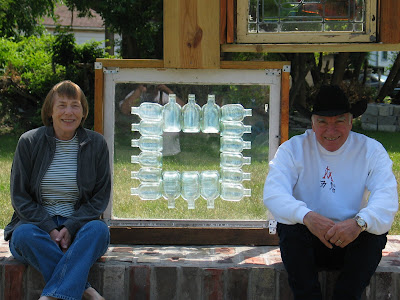 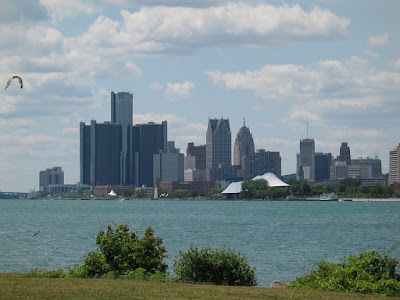 Cousin Doug is always telling us that people out west have the wrong image of Detroit. He says the media has been bashing Detroit for years without justification. Of course I told him lots of people have the impression that Detroit is not a pleasant place to be because of the song Detroit City by Bobby Bare. “ …..by day I make the cars, - by night I make the bars,….I wanna go home I wanna go home, Lord how I want to go home” . It sounds like a place one wants to leave. Whereas you take San Francisco’s song, I left my heart in San Francisco, that song makes people want to stay. People are influenced a great deal by song lyrics. He wasn't buying it, as a matter of fact he had never even heard of the song. As cousin Doug lives here I can see where he might want to protect his nest. He offered to gave us a tour of uptown, downtown, and all around to make his point. This he did.
I have to admit I find nothing wrong with Detroit. From what I saw of it Detroit is a very clean city. It has growing pains and is constantly changing but it is no better or worse than any other city in America.
On the plus side Detroit has a fairly good art scene with a good art museum. And as some of you who have been following my Book of Art readings on Youtube (http://www.Youtube.com/user/crossmmonastery) already know, I have little good to say about art museums. But cousin Doug took us to the Detroit Institute of Art and I must say I was impressed. It is a very people friendly unpretentious museum. They have a little Van Gogh that I liked a lot. They even have easel-benches set up here and there for anyone who wants to set down and do a drawing of some particular painting they like. Art has even penetrated the “bad” parts of the city. We visited a great folk art site in the city’s east side, The Heidelberg Folk Art Project. Check it out: (http://www.heidelberg.org/)