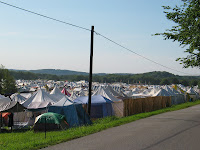 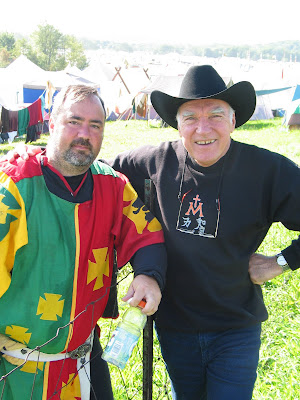 We were heading towards Frank Lloyd Wright’s Falling Water house in Pennsylvania when we came upon this field with thousands of medieval tents and thousands of people dressed in old renaissance costumes. We just had to pull off the road to see what this was all about. Turns out it is an international organization called The Society for Creative Anachronism and it has over 30 thousand members’ worldwide. It’s an organization dedicated to researching and re-creating the arts and skills of 17th-century Europe. This was one of their two week events that features’ tournaments, royal courts, feast, dancing, various classes and workshops. There was a castle built on the side of the hill and there were Knights jousting all over the place. According to this one fellow I talked to there were about 10 thousand people camped here. Now here is the real shocker, this organization was founded in 1966 in….BERKELEY, CALIFORNIA! of all places.. Isn’t that amazing? We wished we could have stayed to see more but we had to move on because we had a Falling Water house tour booked.
Posted by Maestro at 5:51 PM