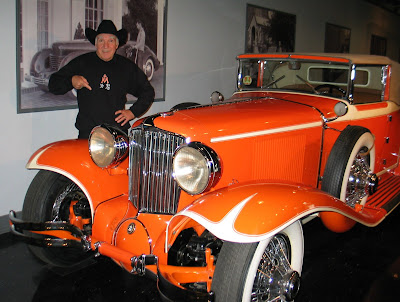 Now I’m a California car guy, as opposed to one of those “eastern” car guys. Give me a 32’ Ford five window, a 34’ three window, chopped, raked, with a bright red paint job, or a customized 40’ Ford, 50’ Merc, or 57’ Chevy, with Rod Powell flames and that my friends is the very best America has to offer in the way of automobiles. The rest are…well, just Detroit pig iron. Cousin Doug and Alice however decided to stop in at the Cord Automobile Museum in, Auburn, Indiana, since it was on our way. This is where the Cord, Auburn and the Duisenberg automobiles were hand built one at a time back in the twenties .(while Henry was cranking out the model “T” and “A”s on his assembly line up in Detroit) The showroom of this museum is filled with some of the finest automobiles ever made here in America. It is truly one of the best automobile museums I have ever seen. But rather than me telling you about the museum, go to their website for all the information. http://www.automobilemuseum.org/Pages/default.aspx
…..and, as for an amazing coincidence, we happened to stop in when they were having an exhibit of Frank Lloyd Wright’s drawings. They even had his personal car on display which was a 1929 Cord L-29 Cabriolet, painted a bright orange and cream.
Posted by Maestro at 2:03 PM