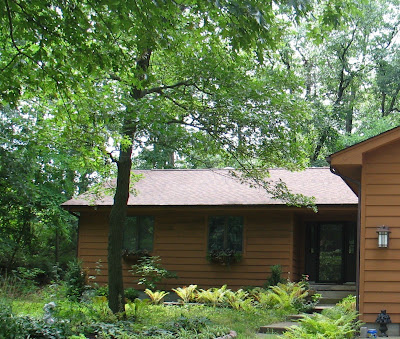 On our way to Chicago we made a brief stop at Cousin Bill’s cottage at Beverley Shores on Lake Michigan where we met up with his other son John and his grandson Hayden. Cousin Bill’s cottage is about 25 miles south of Roger Ebert’s place. As a matter of fact as we were driving around when we were here durning our Route 66 adventure we passed Roger on the road.…but he didn’t recognize me. What’s up with that..? I know he’s a big fan of Les Blank so he must have seen the film Les made about me, http://www.youtube.com/watch?v=6mOFpq3eEnI&feature=related….. Oh well, I was recognized in Paris… thanks to a TV clip on CNN of me shooting up Christo’s umbrellas. http://www.youtube.com/watch?v=G_Z3l6ci9Co The French pay attention to these things…..they know what’s going on in the art world.
Posted by Maestro at 2:08 PM