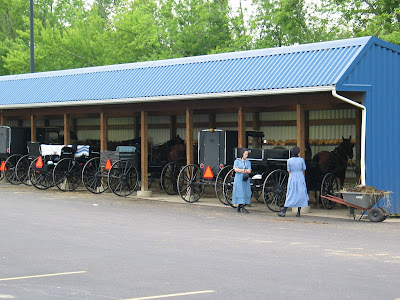 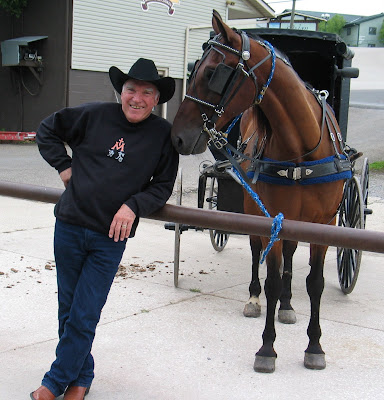 We stayed a couple of days in Holmes County, Ohio, home of one of the nation’s largest Amish communities. There are about a quarter of a million of them in and around Ohio, Pennsylvania and Indiana. They are a God-loving, hardworking, simple, and self-sufficient people. They live by their own rules. Rules that seem archaic and almost childlike in their simplicity when viewed by “normal” standards. They all dress alike in homemade clothes and are mostly seen riding the roads in black hearse-like buggies pulled by a horse that probably has more personality then the occupants. (this one asked me if I knew where he could find a Starbucks)
They allow themselves little in the way of conveniences. For example, they have no electricity, telephones or TVs. Strict rules on how to live their lives are set at birth and continue until death. They are born at one end of a tunnel and die at the other end with nothing in between but hard work and isolation. They have the narrowest view of life imaginable. Every advancement made by humankind in the last three hundred years in the area of art, literature, architecture, philosophy, medicine, industry or space exploration, would not have happened if the Amish were in charge of the world. Humankind would be no different than cows in a field, content to just be, with no thoughts of what could be.

To be around the Amish is like being in a Bizarro world. Everything is opposite. Instead of seeing the world as an amazing place with millions of ways to express the human experience, the Amish prefer to withdraw into a world of cult-like privacy, abdicating everything that makes humans human in order to submit themselves totally to their interuption of the “Will of God”.
Posted by Maestro at 5:48 PM