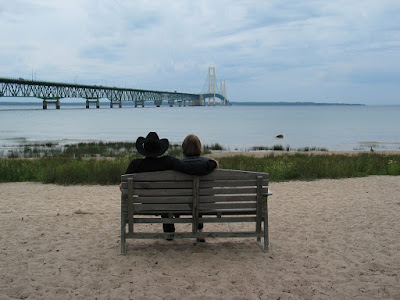 The Mackinac Bridge is quite an attraction up here in Mackinaw City, Michigan. I saw groups of people taking their photo with it as a backdrop and many photos of it in books and posters. Being from the San Francisco bay area I really don’t know what all the fuss is about. There is only one “Famous” bridge in the U.S.; The Golden Gate Bridge.
But enough of that…have you noticed that packages are getting harder and harder to open these days? Everything seems to come in a plastic package that is tougher than Kriyptonite. I don’t think even Superman could open some of these packages. On the plane coming out here the stewardess gave out these packages of peanuts. The little plastic package looked innocent enough, but when I tried to open the little bugger it clung to its closeness like an abalone to a rock. Tug as I might I could not break in,- it was like a little Fort Knox. Finally the guy next to me managed to get it open for me. He said they make them that hard to open because they don’t want kids to open them without adult supervision….peanut allergies, you know….law suit. Has it come to this? Have lawyers in this country scared everyone to the point of mass insanity? Doesn’t anyone accept the fact that things happen, do accidents always have to be someone’s fault? Does someone always have to be sued? Is money that important? What kind of world have we created?
Posted by Maestro at 5:39 PM